Meet the Winners of the 2013 Robert G. Ingersoll Oratory Contest

Sarah, 17, is about to start her senior year at Floyd Central High School. She regularly spends summers at Camp Quest, the secular camp, and she and a friend co-founded her school’s chapter of the Secular Student Alliance during the 2012 winter break. “We’ve struggled with our administration,” she says. “A lot. But hopefully things will go better this term!” 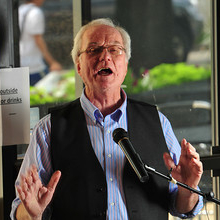 Terry, a graduate of the Humanist Institute, has retired as a reader of stories to children for the Ann Arbor Public Schools. He is now co-chair of the 150th Anniversary Celebration of the First Unitarian Universalist Congregation of Ann Arbor, and tells stories about UU humanist heroes like Tom Paine and Robert Ingersoll, as well as former UUAA member Roy Wood Sellars, who drafted “A Humanist Manifesto” in 1933.

Reading: “A Christmas Sermon” and “What I Want for Christmas”

Tya is the Training and Prevention Specialist for the Delaware Coalition Against Domestic Violence. She says she knew nothing about Robert Ingersoll until she stumbled upon the oratory contest on Facebook. “I was so impressed with how progressive he was for someone of his time,” she says. “What an incredible man.”

Jen, a store manager for Starbucks, is a group leader and volunteer for the Center for Inquiry-DC. “Through our CFI-DC Sunday Humanist Book Club, we read Susan Jacoby’s Freethinkers and The Great Agnostic,”she says. “Both made me want to learn more about Ingersoll and to reignite his passion for compassion and humanism within the free thought movement.”

For a complete set of photographs of the contest by Bruce Press of brucefpressphotography.com, click here.